> Blog>Fundamental Wine Questions> Why do we prefer organic wine?

Why do we prefer organic wine?

In a study published in the Food and Nutrition Journal in December 2017 (https://gavinpublishers.com/admin/assets/articles_pdf/1515065578article_pdf1909863773.pdf) first, 16 pairs of organic and non-organic bottles of wine were identified in 7 regions. The same varieties of grapes in each pair were grown on the same soils (in neighbouring vineyards), in the same climate and in the same year. The resulting wines were assessed for over 250 pesticides. Traces amount were present only in one organic bottle. In contrast, 4 686 ppb were detected in total in non-organic bottles, with a mean of 280 ppb reached by up to 6 pesticides, mostly fungicides and one glyphosate based herbicide.

The most expensive wine (400 euros) was non-organic, from 2009 and very well known: it was given the supreme ranking in the Parker guide: 100pts. It contained 146 ppb of boscalid. This represents 1 460 times the level authorized in drinking water in France (0.1 µg/l) but this is still an admissible level for regulatory authorities. For long-term toxicity, we must consider the petroleum and heavy metal residues in the formulation. In a boscalid-based pesticide there are more than 300 ppb arsenic, around 300 cobalt, 1000 chromium, 600 nickel. This can be sprayed on vineyards and can very easily enter the human cell membranes; it will increase the toxicity and endocrine disruption by at least 1000, especially in hepatic cells. This more realistic type of toxicity will be then reached for 0.04 µg/kg bw/day. For a human of 80 kg this will correspond to 3.2 µg consumed per day. It means that 3.2 µg will be reached by consuming 22 ml of this wine (1/6th of a standard pour size of 150ml). In comparison, at a level of 0.15 mg/l, it would be necessary for a human of 80 kg to drink 80 litres of organic wine per day to reach the threshold of acute toxicity of copper. Obviously alcohol toxicity would be far greater.

Secondly, 195 blind tests with 71 different professionals were conducted. In 77% of the cases, organic wines were preferred. The same conclusion was reached by another independent study. 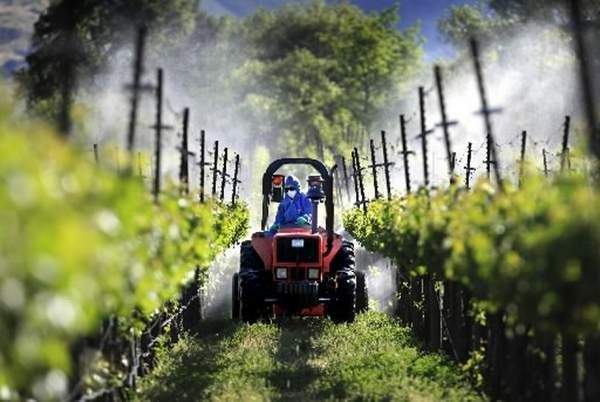 A study published in the Journal of Wine Economics in 2016 (https://www.researchgate.net/publication/292155640_Does_Organic_Wine_Taste_Better_An_Analysis_of_Expert's_Ratings) compiled expert ratings from 3 leading wine publications (Wine Advocate, Wine Enthusiast, Wine Spectator) to assess quality for 74,000 wines produced in California by 3,800 wineries between 1998 and 2009. The results indicate that organic certification is associated with a significant increase in wine quality rating by 4.1 points on average. When most of the wines score between 80 and 100pts, that’s a big difference.

3) Organic farming is better for the environment.

Fertile soil is the basis of all agricultural production. In the DOK-Trial, world’s most significant long-term field trial comparing organic and conventional cropping systems (https://www.fibl.org/en/switzerland/research/soil-sciences/bw-projekte/dok-trial.html), the results have shown that the organically and biodynamically managed plots contain 25% more soil micro-organisms and exhibit higher long-term soil fertility than the conventional plots.

Plants in the organically and biodynamically managed plots are more strongly colonized by mycorrhiza (symbiotic association between fungi and plant roots) and a greater number of mycorrhizal fungi species are involved (higher biodiversity). In the springtime when the soil is not yet fully covered by vegetation, differences in the soil structure are also evident.

Organically grown crops require 30-50% less energy per unit area (including energy for the production of fertilizers and pesticides). Even though yields in the conventional system are higher per unit area, energy usage per unit of yield is lower by 19% in the organic systems.

In the biodynamic system, soil organic matter (humus) content remained stable for the first 21 years of the trial while it declined in all other systems. Differences in this respect between the biodynamic and the conventional system are significant.

Classical economics consider that natural resources are free and unlimited. Our accounting systems take the clean air, fresh water and fertile soil for granted. Negative externalities are invisible. We see the limits of that system today and urgently need to invent a way to include the environmental cost (such as the carbon footprint) of consumer goods into their pricing. It is clear that conventional farming is more expensive than organic farming if we integrate healthcare and environmental costs.

According to 2018 report of the EU General Commissariat for Sustainable Development (https://ec.europa.eu/info/sites/info/files/food-farming-fisheries/farming/documents/agriculture-environment_en.pdf), the full cost of annual treatment of pollution related to agriculture and livestock (nitrates and pesticides) dissolved in water would be more than 54 billion euros per year. The complete cost of environmental remediation of the groundwater stock would be more than 522 billion euros (theoretical cost as it hasn’t be done).

The cost of endocrine disruptors:
A series of scientific studies published in 2015 in the Endocrine Society's Journal of Clinical Endocrinology and Metabolism (https://www.endocrine.org/news-and-advocacy/news-room/2015/estimated-costs-of-endocrine-disrupting-chemical-exposure-exceed-150-billion-annually-in-eu) shows that the exposure of European populations to endocrine disruptors is the cause of many pathologies that represent a cost to society estimated between 150 and 260 billion euros per year (ie between 1.2% and 2% of France's GDP).

According to the results presented, the most problematic substances are organophosphorus and organochlorine pesticides. The direct costs (care, medical treatment, etc.) and indirect costs (loss of productivity, absenteeism, etc.) of the disorders and diseases attributable to these substances amount to some 120 billion euros per year (low range) in Europe.

For all these reasons, it is clear that organic farming is the future of agriculture, whatever it costs now (certification process, additional labour, loss of yield…) will be cheaper than doing nothing on the long term.

What are we going to do about it? Business as usual? Eat and drink whatever is on the menu or available at the local store? Or shall we ask Sommeliers and wine retailers if their wines are organic? It all depends on what kind of world do we want to live in? We are all responsible, whatever we do, buy, consume, throw away, boycott or refuse, it all adds up collectively, our decisions today will shape the world of tomorrow.

If you are interested in preserving our beautiful planet, support an eco-friendly business and share a good bottle of wine with your friends and family, please have a look at our organic wine portfolio here: https://eiffelmarkets.com/29-organic-biodynamic-wine