The Languedoc-Roussillon vineyard spans the Mediterranean coastline from the Pyrénnées Mountains and French border with Spain to the Rhône River Delta and region of Provence. The northern boundaries of the region sit on the Massif Central with the Cévennes mountain ranges dominating the area. This entire geographical zone, hosting 23 AOCs and 19 IGPs, comprises a total of 240,000 hectares and is the world’s largest wine region, being responsible for a third of France's total wine production.

The history of Languedoc-Roussillon wines can be traced to the first vineyards planted along the coast near Narbonne by the Ancient Greeks in the 5th century BCE. Along with parts of Provence, these are the oldest planted vineyards in France.

For the first thousand years, wines from the Languedoc were generally obtained using a singular method, known as “passerillage”, consisting of drying the grapes out in sun after picking in order to achieve over-ripening.

In Paris during the 14th century, wines from the Saint-Chinian area were prescribed in hospitals for their "healing powers".

The building of the Canal du Midi in the 17th Century gave the vineyard a certain impetus by creating a dynamic regional economic area, particularly beneficial to the Mediterranean wine industry.

In 1868, Phylloxera put an end to this promising development.  This devastating insect attacked the roots of the vine, thus destroying the whole vineyard and obliging wine-growers to rip out the native plants.  By using vines having been grafted onto more prolific American plants, the Languedoc wine-growers were seized by frenetic replanting, heedless of the quality, only concerned by quantity with yields reaching 120 hectolitres per hectare.  Harvests were certainly abundant, but to the detriment of the wine quality, often considered light and lacking in flavour. 1900 saw an exceptional harvest of 2.1 billion litres and market prices dropped, which lead progressively to 1907 Revolt of Languedoc Winegrowers, repressed by the government of Georges Clemenceau.

During both World Wars the Languedoc-Roussillon was responsible for supplying the daily wine rations given to French soldiers.

Several decades of surplus wine production in France and French consumers moving away from cheap wines in the 1970s, prompted many Languedoc wine producers to start refocusing on higher quality, uprooting vast areas of the vineyards and reducing average yield by more than half (now = 50hl/ha), adopting measures in favour of biodiversity, and the enhancement of local landscapes and architectural heritage.

This qualitative restructuring strategy of the Languedoc vineyard over the last 40 years was marked by the progressive classification of its land into various Appellations of Controlled Origin (AOC) in the late 1990s and concluded by the official recognition of AOC Languedoc in 2007.

A Meditteranean Climate and Scrubland

The South of France is wrapped around the Mediterranean Sea like a natural amphitheatre, where nature and culture create a charming landscape with little villages full of stories. The majority of annual rainfall occurs during winter, the sea breeze is caressing the vines planted in coastal valleys, while the tramontane inland wind from North-West accentuates the dry climate.

The peak growing season (between May and August) is very dry, with scents of thyme, rosemary, lavender, bay laurel, born in the wild, in the limestone and hot scrubland; whereas parsley, dill, fennel and sage draw their vigour from permeable and cool soils.

A stunningly beautiful and aromatic landscape which perfume the vineyards: saffron note, hint of anise, clove accent, juniper fragrance, and 1000 other flowers meet in a bouquet of scents, from Appellation to Appellation.

Contrasting character of this Languedoc-Roussillon wine region that we discover in 1000 colourful reflections of its wines. Structured, masculine wine from arid massifs, full-bodied wine from undulating valleys, structured wine from terraces, and lively wine from maritime lands ... Each landscape has created a wine in its image.

With global warming, temperature reached an all-time highest peak in July 2019 of 45.9 Celcius, raising concerns about the future of agriculture in the region. 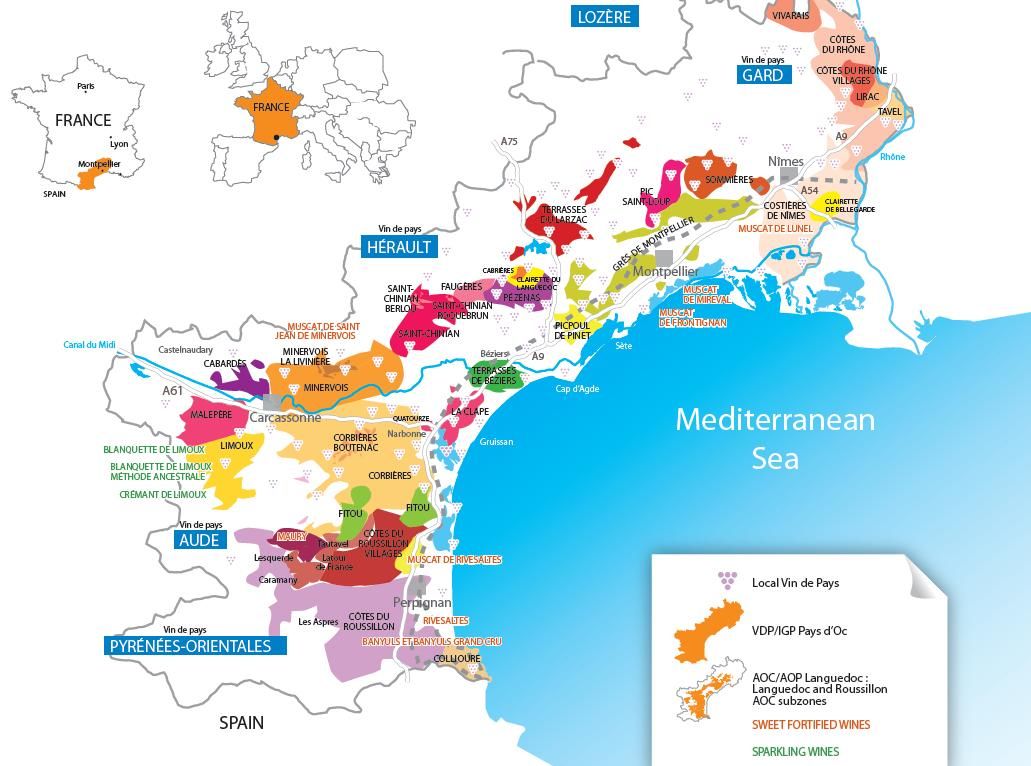 Among the reds, Grenache, Syrah, Carignan, Cinsault, and Mourvedre are major grapes of the Corbières, Faugères, Fitou, and Minervois AOCs. Cinsault is also commonly used in rosé production along with Piquepoul noir, Terret noir, and Grenache Noir. Grenache is also the main grape used in the fortified wines of the Banyuls and Rivesaltes region.

The largest vineyard in the world = 240,000 hectares. Almost 1/3 of France Vineyard. (About the size of Argentina or Australia and NZ vineyards put together).

1.39 billion Litres were produced by the Languedoc-Roussillon region in 2015, including 810 million Litres of IGPs and 260 million litres of AOCs.