Wine has been made in Provence for at least 2,600 years, ever since the ancient Greeks founded the city of Marseille in 600 BCE. Archaeological evidence, in the form of amphora fragments, indicate that the Greeks were producing wine in the region soon after they settled. By the time the Romans reached the area in 125 BCE, the wine produced there had a reputation across the Mediterranean Sea for high quality. The Romans called the area “provincia nostra” (our province), giving the region its name. Just south of the Alps, it was the first Roman province outside Italy, and the oldest vineyard in France. 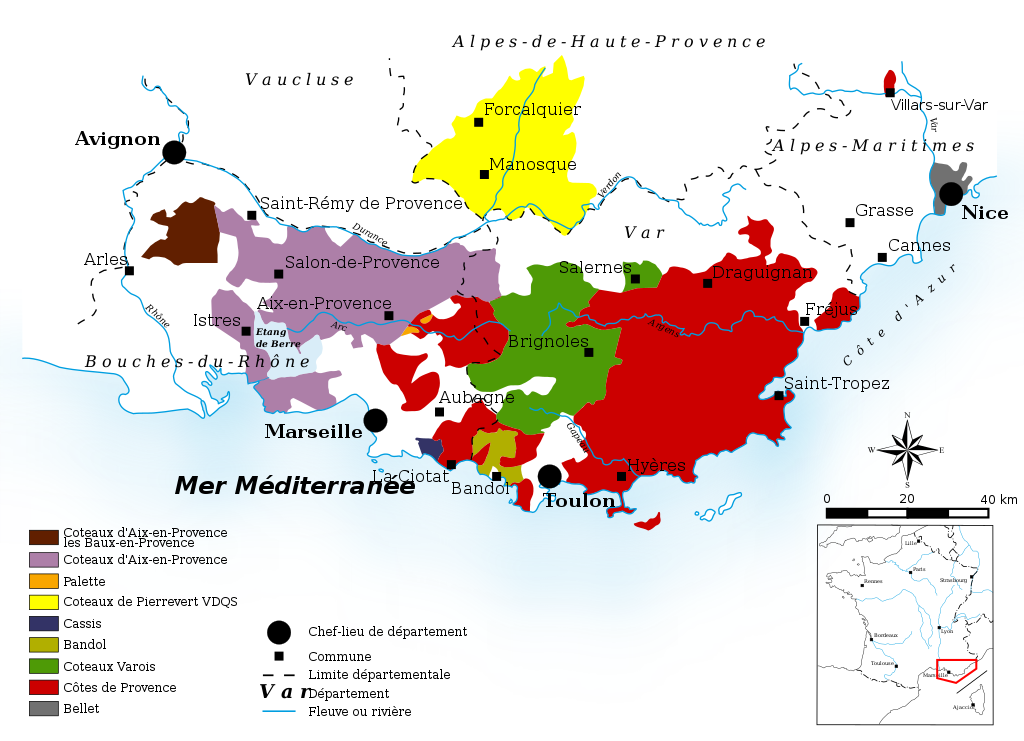 Provence has a classic Mediterranean climate, mild winters followed by warm and dry summers (annual average temperature of 14.5C and between 600 to 900mm annual precipitation). Sunshine is found in abundance in this region with the grapevines receiving more than 2,700 hours per year, almost twice the amount needed to ripen grapes fully. This abundance does have the adverse effect of potentially over ripening grapes if vineyard owners are not cautious. The strong mistral wind from the north provides positive and negative influences on the viticulture. While it can dry the grapes after rain, providing some protection against rot and grape diseases, it can also damage vines that are not securely trained and protected by hillside landforms.

The soil across Provence is varied, lacking uniformity and generalization. Some coastal areas in the region have soils with more schist and quartz in their composition while inland there is more clay and sandstone. In isolated areas, such as the Cassis AOC and near the Mediterranean coastline, are deposits of limestone and shale. These areas tend to be planted with white wine grapes that perform better in those soil types.

Today the region is known predominantly for its rosé wine, though wine critics such as Tom Stevenson believe that region's best wines are the spicy, full-flavoured red wines. Rosé wine currently accounts for 3/4 of the production of Provençal wine, with red wine accounting for about 20% of the region's production. White wine is also produced in small quantities throughout the region (5%).

The rosé wines are usually pale pink, light orange, salmon or peony. The nose reflects the mosaic of terroirs: fruity, floral (thyme, dill, lime), vegetal (mint, tobacco), empyreumatic (flint), balsamic (pine bark). The palates are fresh, round and structured but not astringent with a delicate balance. They can be enjoyed on their own or with pretty much everything, surf and turf, salad.

Provence has 9 wine appellations with AOC status. The Côtes de Provence is the largest (70%) followed by Coteaux d'Aix-en-Provence (15%) and Coteaux Varois en Provence (10%). The other 6 AOCs are Bandol, Les Baux-de-Provence, Bellet, Cassis, Palette and Pierrevert.

The Côtes de Provence AOC (recognized in 1977) is the largest appellation (20 000 ha) that covers over 84 communes in the eastern region of Provence, from the alpine hills near Draguignan to the coast of Saint-Tropez. The region accounts for nearly 75% of all the wine production in Provence (125 million bottles) with rosé accounting for around 80% of the production. While the number is rising, about 15% of wine production is red wine with the remaining 5% white. 23 estates were classified “Cru Classé” in 1955 but only 18 remain today. The appellation Côtes de Provence can be supplemented by 5 geographical names: Sainte-Victoire, Fréjus, La Londe, Pierrefeu and Notre-Dame-des-Anges. 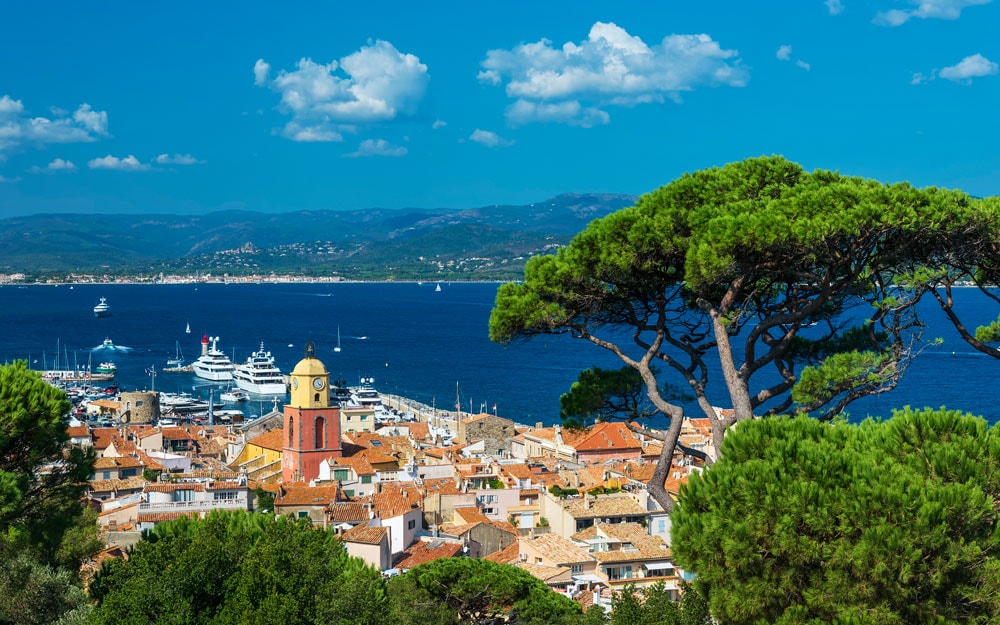 The Côteaux d'Aix-en-Provence AOC (recognized in 1985) is the second largest Provençal wine appellation (3500 ha), covering over 50 communes around the city of Aix-en-Provence. Annual production is about 22.5 million bottles, 55% is rosé, followed by 55% red wine and 5% white wine. The Côteaux Varois en Provence AOC (recognized in 1993) covers 2500 hectares in the central region of Provence, between the Côtes de Provence AOC and the Coteaux d'Aix-en-Provence AOC. The region is sheltered by the surrounding Sainte-Baume Mountains which have a tempering effect. This is most evident in the vineyards around Brignoles where the cooler climate causes harvesting to be carried out in November, several weeks after most Provençal wine areas.  Over 55% of the region's production is rosé with around 40% red wine and small amount of white wine. 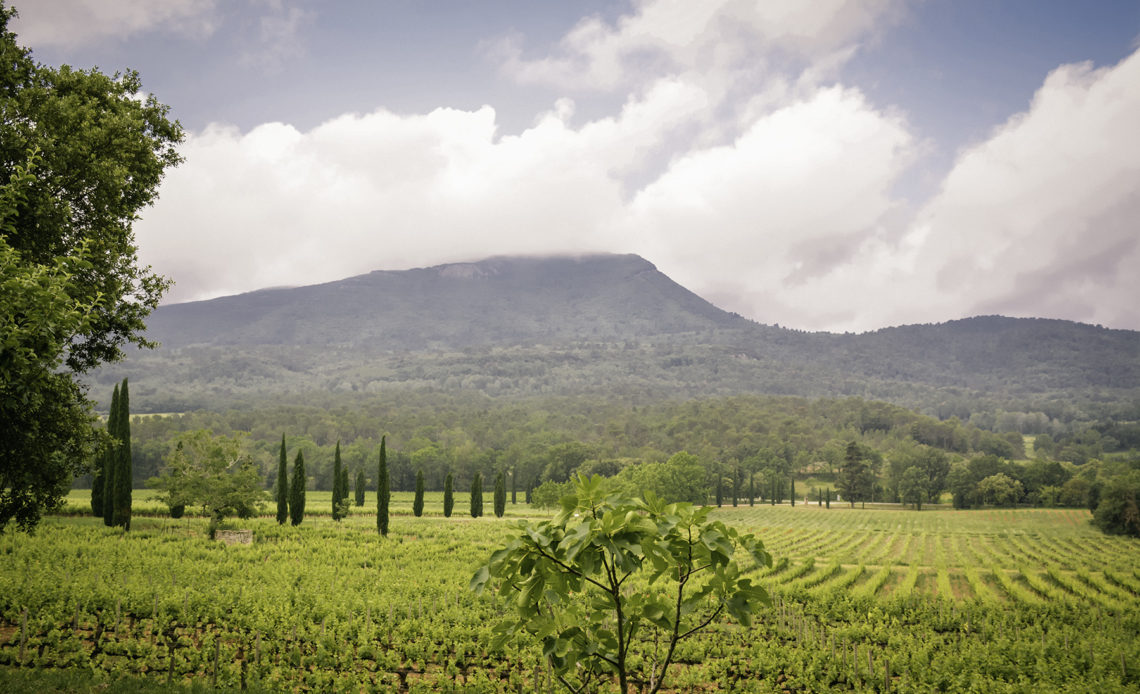 Bandol AOC recognized since 1941. The 1500 hectares vineyards are located near the coast east of Marseille and Cassis, west of Toulon. The warm, coastal climate is ideally suited for the late ripening Mourvèdre grape, which is the major variety for both the red and rosé wines. Mourvèdre must account for at least 50% of the blend, with Grenache and Cinsaut usually completing the composition. Annual wine production is around 6.8 million bottles. Nearly 70% is rosé with 25% red wine and a small amount of white wine making up the remainder. Prior to release, the red wine is required to age at least 18 months in oak. Red Bandol wine is characterized by its dark colour with rich flavours of black fruit, vanilla, cinnamon and leather and usually requires at least 10 years of aging before it fully develops. 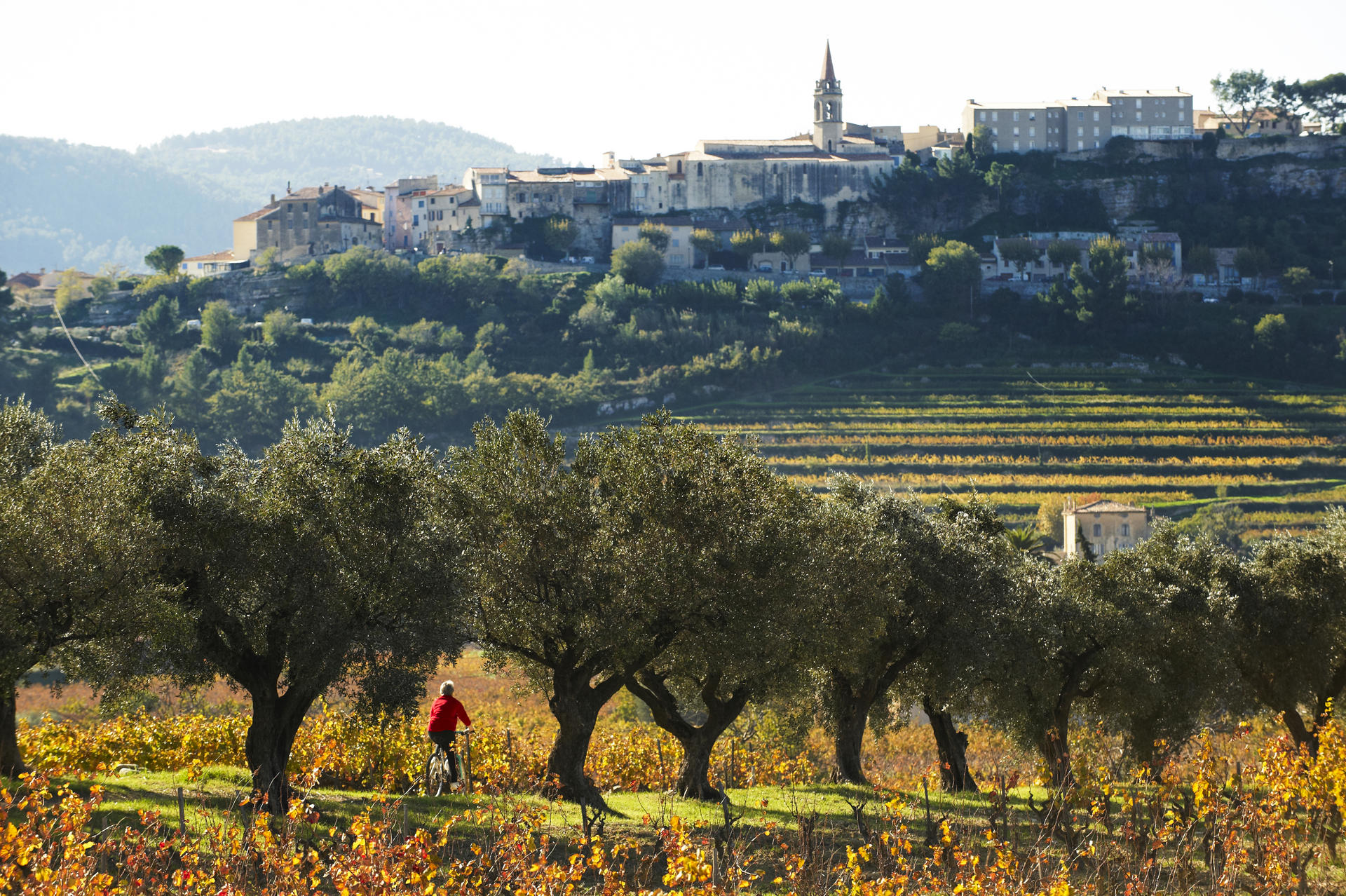 The Baux-de-Provence was granted AOC status in 1995. The climate of the region is very hot with the surrounding valley known as the Val d'Enfer (Valley of Hell). The 300 hectares vineyards are centred on the hilltop village of the Baux-de-Provence for a production around 1.8 million bottles. Red wine accounts for around 75% with some white wine and dry rosé. Care for the environment is central to the work of the winegrowers who are using organic or biodynamic methods over 85% of their geographical area and aim to be the first AOC 100% organic.

The Coteaux de Pierrevert AOC is a minor wine area (300 hectares) located around the village of Pierrevert in the north-eastern section of Provence. The annual production about 1.8 million bottles is red (30%), white (10%) and rosé (60%) mainly made from Grenache, Syrah, Cinsaut, Clairette and Rolle. The climate here is cooler than in other areas of Provence and the wines are thus lighter in body than those of other areas of the region. 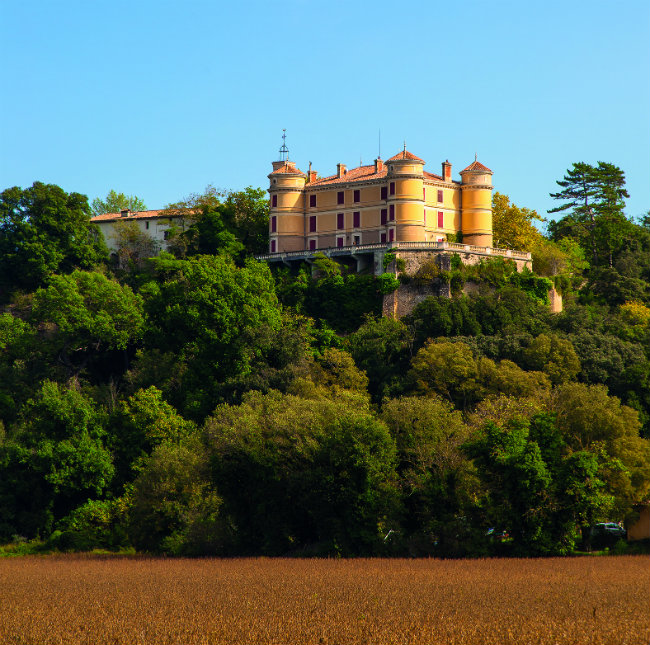 The Cassis AOC, one of the firsts AOC recognized in France since 1936, some 200 hectares located along the coast between Marseilles and Bandol, is unique in the Provençal wine region, due to white wine comprising over 75% of its production (1 million bottles). The soil is primarily limestone, which is particularly suited to the cultivation of Clairette, Marsanne, Ugni Blanc and Sauvignon Blanc, the major varieties of the area. The dry white wines are characterized by their full bodies, low acidity and herbal aromas that pair well with the local seafood cuisine such as bouillabaisse. 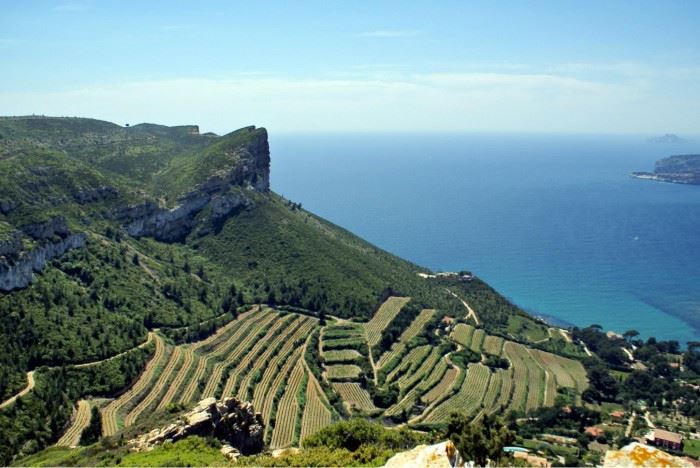 The Bellet AOC, recognized since 1941, is only 52 hectares for 125 000 bottles. There were 9 producers in 2020. Located in south-eastern Provence, near Nice, Bellet has a significant Italian influence with its major white wine being made from the Italian wine grape Vermentino, known in France as Rolle. Though the white wines receive more attention and critics acclaim, Bellet wine production is 40% red, 35% white, and 25% rosé, with most being consumed by tourists to the French Riviera. The white wines have a sustained floral bouquet (bergamot, citrus fruits). Rosé wines are very original, with aromas of broom and violet. The red wines give fruity aromas dominated by plum, apricot and cherries.

The Palette AOC recognized since 1948, is the smallest wine area in Provence (45 hectares and 250 000 bottles) with most of the vineyards being owned by Château Simone (there are 3 others Chateaux). The region is situated on predominantly calcareous limestone soil and produces wines that are similar in style to the southern Rhône region. The main grapes of the region include Cinsaut, Grenache, Mourvèdre and Ugni Blanc.